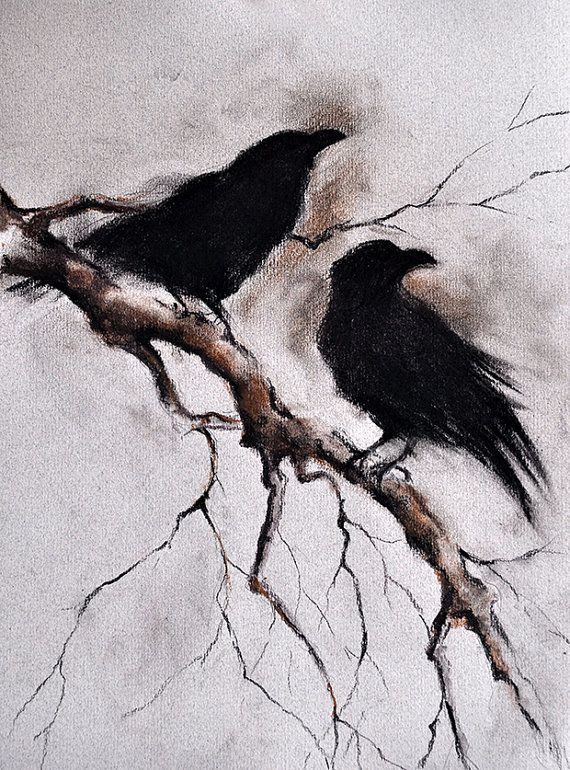 The dry autumn leaves crackled and snapped underfoot as the dwarven boy followed in his father’s’ footsteps.  The air was crisp and cool, warmed by the afternoon sun but cold enough that he could see his breath mist in front of him.  His father was clad in furs, speaking in hushed tones, his words odd and half-formed to the lad’s ears.  He heard a cawing, and in a flapping of wings a great black raven settled on his father’s shoulder.  His father didn’t slow his pace, merely knuckled the bird softly against its breast and continued murmuring words the boy couldn’t hear.

His father walked, and he followed.

He had never been this deep into the forest before.  The trees soared above him, their branches weaving a dark canopy high above that made the light seem dim and foggy.  There was no sound this far into the forest.  It was an unhealthy silence; an oppressive silence.  No birds called, no squirrels chattered.  Stillness was the law here.  The boy looked ahead and saw his father waiting for him in a clearing that had appeared as if by magic.  One step and he was right next to him, the trees silently standing guard in a ring around them, strong sentinels that protected him from harm with the warm heft of their limbs.

It turned its head to the boy and when it spoke it spoke with his father’s voice.

“Are you ready?”  The bird’s eyes were black and cold.

The boy felt fear rise slow and cold in his stomach; he sniffled and reached for his father’s hand.  The older dwarf brushed the boy’s hand away coldly and the raven repeated itself.

“Are you ready?” This time his father sounded angry, impatient.  Dark clouds tumbled overhead as the wind rose; had a storm been building?

The boy looked up at his father, confused and scared.  He shook his head and tears came to his eyes as he reached again for his father, who would not meet his gaze.  The dwarf raised his arm and the raven cawed, a brash grating sound against the silence of the forest.  The call echoed and reverberated through the green leaves that shook with the power of the cry.   It grew rising like a gale through the treetops, surrounding the boy, cawing and screeching all around him until he covered his ears with his hands and screamed to drown it out.

Ravens and crows, hundreds of them, flying from tree tops and branches where they lurked unseen.  They cawed, echoing the great raven that spoke with his father’s voice and dove at him mercilessly, forcing him to stumble backwards, almost falling.  They started to fly in circles around him, cawing and screeching with a thunderous ruffling of feathers, separating him from his father.  The boy howled again in fear, but even his screaming and the hurricane of ravens couldn’t drown out his father’s voice as the giant raven burst through the roiling wall, cold eyes black with rage as it clawed and scratched him.  His father’s voice that cracked and rang in fury, even as the raven ripped his eyes out.

Published by The Drunk Scribe

Seattle-based writer. D&D, doublestuf oreo's, hiking. Not necessarily in that order. View all posts by The Drunk Scribe